Largest rocket since Apollo rolls out 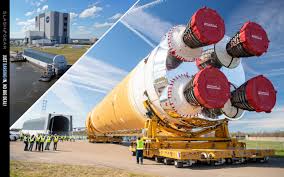 The Boeing-built SLS Core Stage was put on the Pegasus barge to make its voyage downriver to the Stennis Space Center in Bay St. Louis, Mississippi for hot-fire tests before delivery to the Kennedy Space Center in Florida.

According to Boeing, the SLS Core Stage was announced completed on December 9, 2019, and is slated to power NASA's unmanned Artemis 1 mission on its circumlunar flight. This is the first time a completed rocket has shipped from Michoud since Apollo and is now on its way to Stennis for live engine tests, inspection, and refurbishment before its final journey to Kennedy for stacking with the Interim Cryogenic Upper Stage (ICPS) and NASA's Orion spacecraft.