> From air taxis to autonomous vehicles and voice-activated boats: - pirateswithoutborders.com 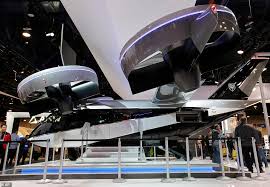 Whether it be by land, air or sea, CES was a haven for a number of wild rides this year.

Companies from around the world showcased their futuristic vehicles in Las Vegas, which boasted cutting edge technologies such as artificial intelligence, electric power and autonomous abilities.

The event showcased everything from air taxis to a boat powered by voice commands to a conference room on wheels - and more.

However, autonomous technology was the hype this year, with Honda's stunning concept car stealing the show on Day four of the event.

The Japanese carmaker unveiled its Augmented Driving Concept that combines several novel driving technologies that are designed to help drivers seamlessly switch between manual and autonomous modes, including a moveable steering wheel that doubles as an accelerator and brake.

The steering wheel can also turn on the car by double-tapping the top and can by moved from one side to another, meaning a person sitting anywhere in the car - left, middle, or right - could drive.