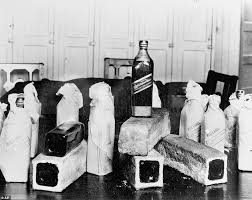 It is hard to imagine in a happy hour, White Claw-obsessed kind of world, but 100 years ago a ban on alcohol went into effect across the United States.

The 18th Amendment, which prohibited the 'manufacture, sale, or transportation of intoxicating liquors,' began on January 17, 1920 and ushered in the era known as Prohibition. The push to put an end to Americans drinking was a decades-long effort led by women like Carrie Nation, who wielded her hatchet to smash up saloons.

Prohibition gave rise to perilous, sometimes blind-inducing bathtub gin served at secret clubs called speakeasies and empowered organized crime, making the mafia unfathomably rich with gangsters like Al Capone earning, by some estimates, hundreds of millions of dollars a year in bootlegging and other illicit activities. Gang violence reached its pinnacle on Saint Valentine's Day Massacre on February 14, 1929 when seven men were shockingly gunned down in Chicago.