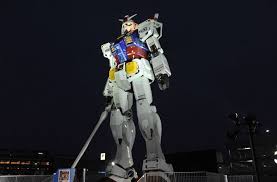 First going to air in 1979, Yoshiyuki Tomino's Gundam series has left an indelible mark on Japanese culture and the world of animation. Its giant, samurai-influenced, sword-fighting mecha robots have launched nearly 50 official TV series and movies, and inspired countless others. Transformers, Pacific Rim, Real Steel, Voltron, MegaBots, anything with a big robot in it owes some debt to Gundam, indeed, even the Master Chief's armor in the Halo series of video games. It's impact is so great, Gundam is currently ranked as the 14th highest-grossing media franchise of all time.

Japan in particular loves these big fellas. Sales of miniature figurines from the official Bandai Namco company itself were approaching half a billion back in 2015. And there's been no shortage of full size, 18-meter-tall (60-ft) recreations either.