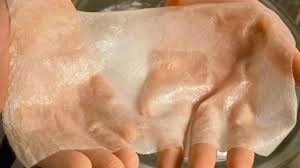 The handheld 3D skin printer was developed by engineers at the University in Toronto in 2018. The innovative technology passed a major milestone earlier this month, after the team reported promising results following its latest trial of the device on pigs in the journal of 'Biofabrication'.

One researcher on the team described the sci fi-looking tool as a "duct tape dispenser" that uses artificial tissue "tape."

A video posted by the University of Toronto shows the skin printer in action.

Patients suffering from severe burns often undergo skin grafts, which involves removing damaged tissue and replacing it with healthy skin taken from another part of the body. But this treatment is not always a viable option, as victims of severe burns sometimes have no healthy skin left to use.