> A NEW SPACECRAFT IS JOURNEYING TO THE SUN TO GET A NEVER-BEFORE-SEEN... - pirateswithoutborders.com

A NEW SPACECRAFT IS JOURNEYING TO THE SUN TO GET A NEVER-BEFORE-SEEN... 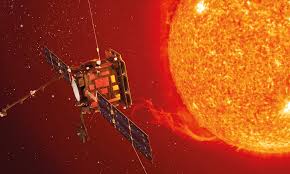 This weekend, the European Space Agency and NASA are launching a new, hardened spacecraft bound for the center of our Solar System, where it will get a view of our Sun that no vehicle has seen before. The probe, dubbed the Solar Orbiter, will be tasked with observing the Sun's poles, in hopes of better predicting how our parent star behaves.

Up until now, practically all vehicles we have sent toward the Sun have stuck around the star's mid-section, orbiting in line with all the planets in the Solar System. But the Solar Orbiter is set to fly a path around the Sun at a high angle, so that it can get a glimpse of the polar regions that have eluded our observations for so long. Just like Earth, the Sun also has poles on its "top" and "bottom," but they've been hard to see since our planet orbits near the Sun's equator.

Once in this lopsided orbit, the Solar Orbiter will come within 26 million miles, or 42 million kilometers, of the Sun, gathering images and data from a truly unique vantage point. Hopefully, this new information can help scientists figure out some of the mysteries of our star that have remained unsolved for decades. Specifically, they want to know what drives our star's strange 11-year cycle, where it alternates between times of intense activity and times of quiet.

"We understand the cyclic behavior; we've observed it for 400 years, ever since people have pointed the telescope at the Sun," Daniel Müller, the ESA's project scientist for the Solar Orbiter mission, tells The Verge. "But we don't really know why it is 11 years and obviously [what drives] the strength of the cycle."