> The world's first FLOATING CITY could become a reality within a decade under UN-backed... - pirateswithoutborders.com

The world's first FLOATING CITY could become a reality within a decade under UN-backed... 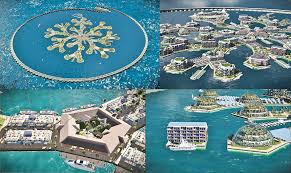 Blueprints to create the planet's first floating city could be made reality within the next decade as scientists ratchet up efforts to safeguard communities threatened by rising sea levels.

The United Nations is spearheading the revolutionary project, which will see self-sufficient buoyant platforms anchored to the sea bed upon which houses can be built.

Each one would be sturdy enough to home tens of thousands of people while also boasting typical town features such as public squares and markets.

When the plan was unveiled last year it grabbed headlines because of its scale of ambition, but this week senior figures breathed new life into the idea by speculating a 10-year timetable for the first floating city could be achievable.

UN-Habitat's deputy director Victor Kisob said: 'Floating cities sound like a crazy idea but they could lead to all sorts of possibilities if done in the right way,' according to the National.

He added: 'The next step would be to design a prototype with partners from the private sector that could be tried and tested.'

Ninety per cent of the world's largest cities are vulnerable to submergence as glaciers melt and seas rise on a warming planet.