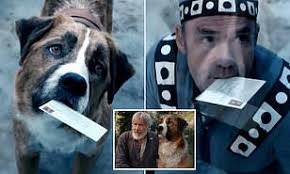 In The Call of the Wild, Ford's character John Thornton steals a dog and the pair become the best of friends.

But rather than search for a 140lb St Bernard-Scotch Collie mix to cast as Buck, producers chose to animate the dog with computer graphics.

Terry Notary, a former Cirque du Soleil performer, was recruited by director Chris Sanders to act the part of the lovable mutt alongside Ford, 77.

Previously known for his motion-capture work in films Avatar, The Hobbit series and the Planet of the Apes reboot, Notary got down on all-fours and mimicked Buck's movements before he was replaced in post-production editing.

The end result has been praised as 'absolutely breathtaking' by animal welfare activists, who noted the producers' decision not to exploit creatures.

The technique, motion capture CGI, is the same as that used in creating the fictional character Gollum in Lord of the Rings.