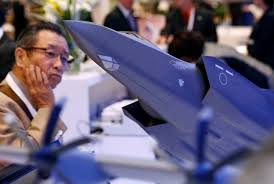 Japan's 2019 Mid-Term Defense review quietly revealed that after years of hesitation, Tokyo has decided to press ahead with development of its own domestically designed sixth-generation Mitsubishi F-3 air-superiority stealth fighter, rather than purchasing an additional foreign stealth design to supplement its growing fleet of F-35s.

In February 2019, the Japanese Ministry of Defense explicitly confirmed these intentions to Jane's. Reportedly, F-3 performance requirements are set to be released in the 2020 budget, with development officially beginning in 2021 and a first flight targeted for 2030.

The new F-3 jets would then begin replacing Japan's over one hundred home-built Mitsubishi F-2 single-engine fighters—heavily upgraded (and over-priced) F-16s—starting in the mid to late 2030s.