> Why America's longest war has lasted so long - pirateswithoutborders.com 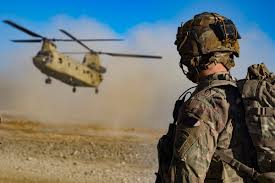 Significant hurdles still have to be overcome, involving among other things the Taliban having to meet a vague standard of reducing, though not ceasing, their military operations. But a conclusion to direct American involvement in the Afghan war does seem closer than at any previous time in the last 18 years.

Expect many commentaries in the weeks ahead about what went well and what went poorly — especially poorly — in the Afghanistan war. There will be hindsight-laden appraisals of tactics and strategy and of such things as troop surges said to have started too late or ended too soon. Most of the commentary probably will miss the most fundamental aspects of America's experience in Afghanistan — what most deserves to go into the history books and what is most relevant to avoiding more ultra-long wars in the future. Those fundamentals have less to do with tactics and strategy and more to do with broader perceptual and political patterns in the United States, including the following:

Getting Stuck in Terrorist History

U.S. forces were sent to Afghanistan in 2001 in direct response to the 9/11 terrorist attack, perpetrated by Osama bin Laden's al-Qaida at a time that this group was a guest in the Taliban-controlled portion of Afghanistan. September 11th was such a severe national trauma that it has shaped Americans' thinking about terrorism and counterterrorism ever since. It became a template in which perceptions about terrorism and combating terrorism were formed, even though the template does not always conform to a wider reality.