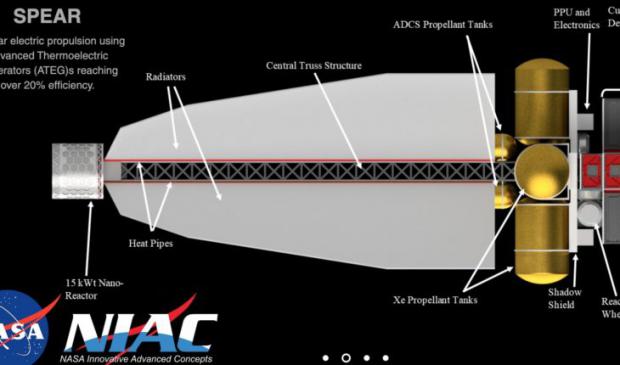 This will subsequently require a reduction in operating temperatures and reduce the total power levels achievable by the core. However, the reduced mass will require reduced power for propulsion, resulting in a small, inexpensive nuclear electric spacecraft.

The ATEG system they previously proposed would have 15,000 watts of thermal energy about 3000 watts of electrical energy. The best RTG that NASA has flown was about 300 watts. GPHS-RTG or General Purpose Heat Source — Radioisotope Thermoelectric Generator, was used on Ulysses, Galileo, Cassini-Huygens, and New Horizons missions. The GPHS-RTG has an overall diameter of 0.422 m and a length of 1.14 m. Each GPHS-RTG has a mass of about 57 kg and generates about 300 Watts of electrical power at the start of mission (5.2 We/kg), using about 7.8 kg of Pu-238 which produces about 4,400 Watts of thermal power.