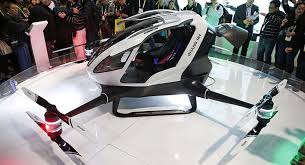 EHang isn't the only company trying to get air taxis to fly in cities around the world, and is not the first to build somewhere for them to operate from, but its so-called E-port could well be the first to go into operation – something that's scheduled to happen by the end of 2020.

The E-port terminal building will be three stories high and have a 2,500 sq m (almost 27,000 sq ft) footprint. There will be a reception hall on the first floor, a passenger waiting area on the second and departure/arrivals on the third. Four landing pads are to be located on the roof, though the plan does call for 20 EHang 216 two-seat autonomous aerial vehicles (AAV) to be in operation at the facility.

The EHang 216 electric air taxi sports eight arms around the passenger pod, each home to two rotors. It has a reported top speed of 130 km/h (80 mph), but will cruise at about 100 km/h – though flight time is currently just 21 minutes per charge so it's likely that only some of the fleet in Hezhou will be in the air at the same time, while others are on charge.