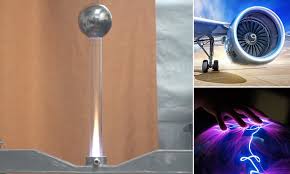 Plasma thrusters are already operational on spacecraft as a means of solar-electric locomotion, using xenon plasma, but such things are no use in the Earth's atmosphere, as accelerated xenon ions lose most of their thrust force to friction against the air. Not to mention, they only make a small amount of thrust in the first place.

This design, conceived and built by a team at the Institute of Technical Sciences at Wuhan University, uses only air and electricity, and appears to produce an impressive push that may see it become relevant to electric aircraft applications.

The device works by ionizing air to create a low-temperature plasma, which is blown up a tube by an air compressor. Part way up the tube, the plasma is hit with a powerful microwave, which shakes the ions in the plasma about violently, crashing them against other non-ionized atoms and vastly increasing the temperature and pressure of the plasma.