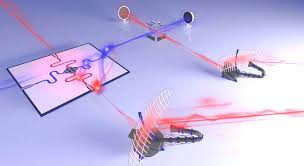 Quantum entanglement describes the bizarre state where two particles can become linked so tightly that they seem to communicate instantly, no matter how far apart they are. Measuring the state of one particle will instantly change the state of the other, hypothetically even if it's on the other side of the universe. That implies that the information is moving faster than the speed of light, which is thought to be impossible – and yet, it's clearly and measurably happening. The phenomenon even unnerved Einstein himself, who famously described it as "spooky action at a distance."

While we still don't entirely understand why or how it works, that's not stopping scientists figuring out ways to use it to our advantage. Strides are being made towards creating quantum computers and a quantum internet, both of which would be super fast and nigh-unhackable. And now, in a new study by physicists at the Institute of Science and Technology Austria (IST Austria), MIT and the University of York, the phenomenon been applied to radar.