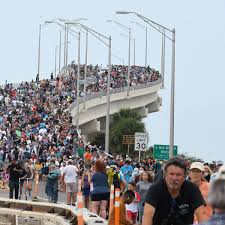 Despite warnings from NASA officials and the risks implied by the current pandemic, which has so far claimed over 100,000 lives in the U.S., approximately 150,000 people gathered on Florida's space coast to watch SpaceX's first attempt at launching astronauts to space yesterday (May 27).

SpaceX attempted to launch its Crew Dragon spacecraft with two veteran NASA astronauts from NASA's Kennedy Space Center yesterday as part of the Demo-2 test flight to the International Space Station. Unfortunately, bad weather delayed the launch to no earlier than Saturday (May 30).

Despite the risks of the coronavirus pandemic (there have been over 52,000 cases and 2,300 deaths related to the novel coronavirus in Florida so far), stormy weather and a tornado warning, approximately 150,000 people traveled to watch the event. "We are still running cell phone data and other reports for possible additional insight, but the estimated number of viewers in person was 150,000," Florida's Space Coast Office of Tourism told Space.com in an email.