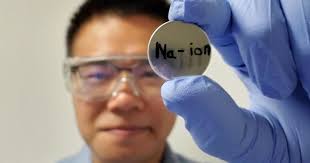 cientists at Washington State University have come up with a design billed as a potential game changer in this area – a sodium-ion battery offering a comparable energy capacity and cycling ability to some lithium-ion batteries already on the market.

In a way, sodium-ion batteries function just like lithium-ion batteries, generating power by bouncing ions between a pair of electrodes in a liquid electrolyte. One of the problems with them in their current form, however, is that while this is going on inactive sodium crystals tend to build up on the surface of the negatively-charged electrode, the cathode, which winds up killing the battery. Additionally, sodium-ion batteries don't hold as much energy as their lithium-ion counterparts.