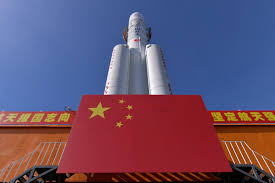 Engines blazing orange, a Long March-5 rocket took off under clear skies from Hainan Island, south of China's mainland, as space enthusiasts gathered on a beach across the bay from the launch site.

"This is a kind of hope, a kind of strength," said Li Dapeng, co-founder of the China branch of the Mars Society, an advocacy group. He watched with his wife, 11-year-old son and 2,000 others on the beach.

Launch commander Zhang Xueyu announced to cheers in the control room that the rocket was flying normally about 45 minutes later. "The Mars rover has accurately entered the scheduled orbit," he said in brief remarks shown live on state broadcaster CCTV.