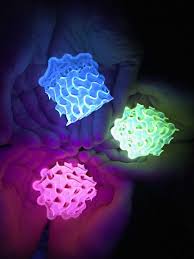 The researchers have succeeded in transferring the properties of highly fluorescent dyes to solid optical materials, opening up new possibilities in everything from the development of next-generation solar cells to advanced lasers.

The research was carried out by scientists at Indiana University and the University of Copenhagen, who set out to solve a 150-year-old problem involving fluorescent dyes. The problem is known as "quenching" and occurs when dyes are converted to solid states, which causes them to bunch up tightly and become electronically coupled, dulling their fluorescent glow. This issue of quenching plagues the great majority of the more than 100,000 dyes that exist today.

"The problem of quenching and inter-dye coupling emerges when the dyes stand shoulder-to-shoulder inside solids," says study author Amar Flood, a chemist at Indiana University. "They cannot help but 'touch' each other. Like young children sitting at story time, they interfere with each other and stop behaving as individuals."

Flood and his colleagues believe they have found a solution to this problem, through the use of star-shaped macrocycle molecule that stops the fluorescent molecules from interacting with one another.