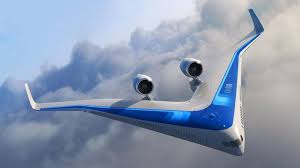 Last year we caught wind of an interesting aviation concept cooked up by engineers at TU Delft, which consisted of a novel V-shaped design that promises significant efficiency gains over conventional aircraft. The project has now progressed from slick renders of a futuristic aircraft to a scale model capable of flight, which was recently shown in action for the very first time.

In its fully realized form, the Flying V aircraft would feature a cabin, cargo hold and fuel tanks integrated into its V-shaped wing structure, which would have a wingspan equal to that of an Airbus A350. This would enable the Flying V to take off and land using existing airport infrastructure, with enough space on board for the same amount of cargo and human passengers, with 314 seats in the standard configuration.

Where the Flying V would offer some performance benefits, however, is through improved aerodynamics due to its overall smaller airframe. Less mass means less resistance, which means less fuel is needed to carry the Flying V to its destination. According to the team, the reduced weight and unique shape of the Flying V could see it use 20 percent less fuel than an Airbus A350-900, the most advanced commercial aircraft in action today.