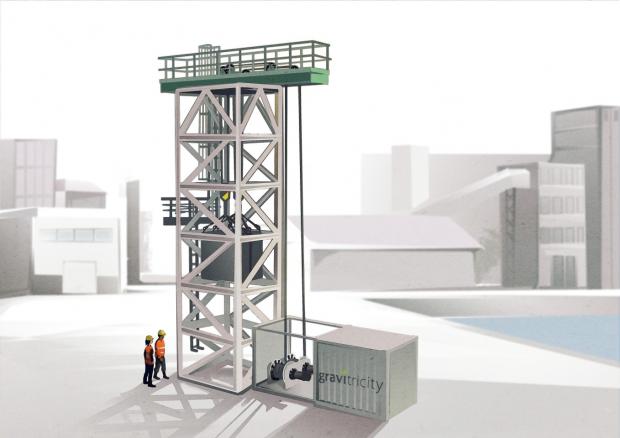 As renewable energy generation grows, so does the need for new storage methods that can be used at times when the Sun isn't shining or the wind isn't blowing. A Scottish company called Gravitricity has now broken ground on a demonstrator facility for a creative new system that stores energy in the form of "gravity" by lifting and dropping huge weights.

If you coil a spring, you're loading it with potential energy, which is released when you let it go. Gravitricity works on the same basic principle, except in this case the springs are 500- to 5,000-tonne weights. When held aloft by powerful cables and winches, these weights store large amounts of potential energy. When that energy is needed, they can be lowered down a mineshaft to spin the winch and feed electricity into the grid.

Gravitricity says that these units could have peak power outputs of between 1 and 20 MW, and function for up to 50 years with no loss of performance. Able to go from zero to full power in under a second, the system can quickly release its power payload in as little as 15 minutes or slow it down to last up to eight hours.

To recharge this giant mechanical battery, electricity from renewable sources power the winches to lift the weights back to the top. In all, the system has an efficiency of between 80 and 90 percent.

Ultimately, this kind of system should be able to store energy at a lower cost than other grid-scale energy storage systems, such as Tesla's huge lithium-ion battery in Australia. The concept sounds very similar to the one behind Energy Vault, which uses a crane to hoist concrete blocks into a tower.