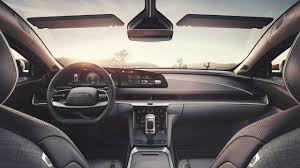 Lucid, however, is entirely another story. Headed by Peter Rawlinson, the chief engineer on the Tesla Model S, the company set out to develop an electric sedan that was more efficient, more comfortable, faster charging, more aero-efficient, has more interior volume and luggage space, would be faster on the drag strip and had a longer driving range than the Tesla Model S. Although the Air won't start series production for another nine months or so, it appears they are about to achieve all of those lofty goals.

Lucid tells us the interior of the Lucid Air "reflects a revolution in how next-generation free form displays are elegantly integrated into the design architecture of the cabin, providing a beautiful and seamless way of interacting with the vehicle software and human-centric user interface."

In front of the driver sits a huge 34-inch, curved glass 5K display that appears to float above the dashboard. In my time with the Porsche Taycan, I really enjoyed its beautiful 16.8-inch curved driver's display. The Air's display is more than twice as long as the Taycan's and is broken up into three distinct content sections.

In addition to the digital displays, there are several highly tactile, precision-milled physical controls, including ribbed turbines on the steering wheel, a volume control roller, and alloy toggle switches to adjust the climate control system. Additionally, Lucid has partnered with Amazon to implement an advanced version of Alexa Built-In into the Air.

Owners will be able to use Alexa for navigation, phone calls and messaging, streaming media, smart home control, as well as adding items to a shopping cart or to-do list. The system will also allow for vehicle control features including adjusting the climate system. Over time, the system will add even more features via over-the-air (OTA) updates.