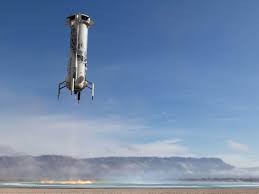 Blue Origin, the space company founded and funded by Amazon head Jeff Bezos, is planning to make its 13th trip to space on Thursday, using a New Shepard rocket that will be flying for the seventh time, which will set a record for rocket recycling.

Mission NS-13 will be carrying a dozen payload to the edge of space and back, including a lunar landing sensor demonstration that will test technologies for future moon missions as part of NASA's Artemis program.

The sensor will be the first payload to ride mounted to the exterior of New Shepard rather than inside its capsule.

SpaceX, another commercial space outfit headed by a famous billionaire in the form of Elon Musk, has so far used a single Falcon 9 booster up to six times. It's worth noting, though, that the Falcon 9 is a different class of rocket that is used for more technically complicated orbital missions.

A few of the other payloads on board this flight of New Shepard include a test of a new system to autonomously grow aquatic plants that could supplement a crew's diet and a new cooling system developed by NASA for spacecraft electronics.