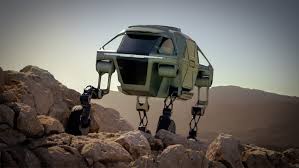 Okay, maybe it was a holiday party. Turns out, Hyundai was actually pretty serious. This week, it announced that it has formed a new studio to work on "ultimate mobility vehicles" (UMVs), including the Elevate. Soon, all-terrain vehicle could have a broader meaning, encompassing hole hops, wall climbs and boulder scrambles.

New Horizons Studio will bring together Hyundai's expertise in vehicles, robotics and intelligent mobility in order to push the boundaries of vehicular engineering to "reimagine how vehicles might traverse the world." And that world definitely isn't limited to mere road, track and level trail, but also applies to "unconventional and off-road terrain, including places where vehicles have never roamed before."

Adding to the intrigue is the fact that Hyundai calls the Elevate concept the first UMV on which New Horizons will work. As imagined during initial concept phase, the Elevate has four electric-driven wheels attached to robotic legs. It can travel as a pod-like electric car, but its real magic happens when terrain becomes impassable ... or so it seems. The Elevate extends its legs to walk, climb and stretch over obstacles. The legs have five degrees of motion, including wheels that rotate 360 degrees in relation to the "ankle" for precise micro-movement. Hyundai said the Elevate could climb up to 5 feet (1.5 m) of vertical wall and step over 5-foot gaps.