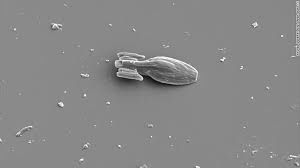 Scientists have 3D-printed a microscopic Star Trek spaceship USS Voyager that 'swims' through liquids on its own.

A team of physicists at Leiden University in the Netherlands created the Intrepid-class starship which measures 15 micrometers (0.015 millimeters) long.

The miniature Voyager is part of research being conducted to help understand how shape affects the motion and interactions of microswimmers.

Microswimmers are tiny particles comparable in size to bacteria that can propel themselves through liquids on their own due to chemical reactions.