> Could the Air Force X-37B become a laser and missile-firing space drone? - pirateswithoutborders.com

Could the Air Force X-37B become a laser and missile-firing space drone? 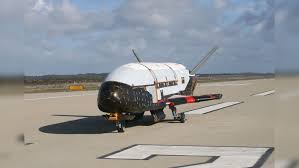 Is the Air Force X-37B an armed space drone operating beyond the Earth's atmosphere to destroy enemy satellites, ICBMs or aircraft of some kind? Is it a mobile surveillance platform intended to apply the latest sensor technologies to track enemy missiles, planes and satellites? Is it being developed as a moving networking platform or "atmospheric node" to connect satellites with one another, relay time-sensitive radar warning data,or send information to weapons assets within the Earth's atmosphere?

Just what is the mission intent and concept of operation for the U.S. Space Force's experimental X-37B Orbital Test Vehicle (OTV) drone? Such questions emerge as the Boeing-built space drone enters new phases of technological maturity and nears operational status.