User-configurable xFold drone can lift up to 1,000 pounds 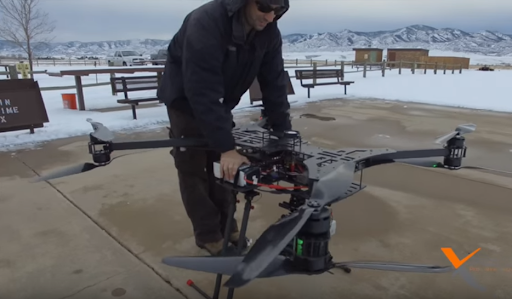 Manufactured by San Francisco-based startup ZM Interactive, the xFold is available in four carbon fiber-bodied models. Each one of these can in turn be flown in its base quadcopter form, or with six, eight or even 12 motor/propeller units – in the latter two configurations there are two such units located on the end of each arm, so the drone doesn't have eight or 12 separate arms. Additionally, the arms can be folded back (but left attached to the aircraft) for transport or storage.

According to ZMI, users can swap the arms on and off within a matter of minutes. Depending on what the drone is being used for, operators can also quickly install optional extra tools such as robotic arms, fire-extinguishing ball droppers, crop-spraying equipment, or 3D mapping sensors.

The smallest model, the xFold Spy, has a reported battery life of 35 minutes in its four-prop configuration, ranging to a still-decent 25 minutes in 12-prop mode. It has a claimed cargo-lifting capacity of 6 lb (2.7 kg) in the former and 15 lb (6.8 kg) in the latter, although in both cases the flight time goes down to 10 minutes.

The larger xFold Travel and Cinema models are spec'd progressively higher, with the xFold Dragon model sitting at the top of the pack. One of its variants, the Dragon Hybrid, utilizes a gasoline/battery-electric hybrid power plant for a stated flight time of four to eight hours in six-prop mode. Another variant, the Dragon H, can reportedly lift up to 1,000 lb (454 kg) in its 12-prop setup. It can be seen in action, in the following video.

Prospective buyers can inquire about pricing and availability via the Source link below – needless to say, though, all of the xFold drones are aimed at professional use.