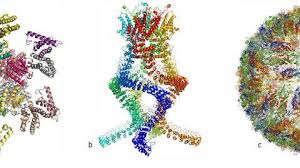 By achieving atomic resolution using cryogenic-electron microscopy (cryo-EM), researchers will be able to understand, in unprecedented detail, the workings of proteins that cannot easily be examined by other imaging techniques, such as X-ray crystallography.

Cryo-EM has been around for decades. It has long been able to determine the shape of flash-frozen samples by firing electrons at them and recording the resulting images. Advances in technology for detecting the ricocheting electrons and in image-analysis software catalyzed a 'resolution revolution' that started around 2013. This led to protein structures that were sharper than ever before — and nearly as good as those obtained from X-ray crystallography, an older technique that infers structures from diffraction patterns made by protein crystals when they are bombarded with X-rays.