> World's First 3D-Printed House Made Of Local Raw Earth – And it Closes the Roof With a Dome - pirateswithoutborders.com 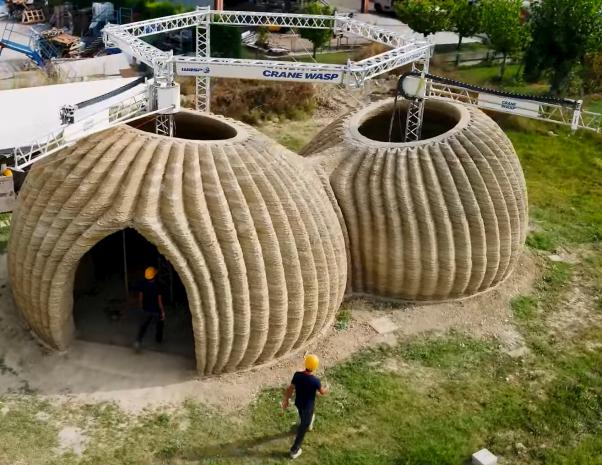 Like the industrious wasps, the houses are made using the clay from wherever they are being built, which also means if they have to be knocked down, the only waste is the plumbing, gas, and electrical components.

Mario Cucinella Architects in Bologna maintains that "the idea of the city must be challenged" and their contender is a modular-series of clay pods not out of place inside the Great Enclosure in Zimbabwe.

The method is called TECLA, short for technology and clay, co-developed by Cucinella with help from another company called WASP, which specialize in 3D-printing solutions.

Their modular design utilizes two 3D-printing arms at once to create two domed spaces out of 350 layers of undulating clay and rice chaff as insulation, similar to the traditional building methods of the Moroccan Kasbah. The goal is to be totally off-grid, and the design and durability can be modified according to climate and local challenges.

Cucinella lost the opportunity to call the project "circadian cupulas," as one is designed for the day, with a large circular skylight and door letting in plenty of natural light, and another one for night, with a smaller, warmer, enclosed setting under a smaller window.

Treehugger says the idea is that Cucinella Architects will make these cupulas as self-sustaining eco-communities, both for the outskirts of urban areas, and for developing countries through WASP's contribution of a sort of DIY-version of the houses.