> Fruit-picking drones may be heading for an orchard near you - pirateswithoutborders.com

Fruit-picking drones may be heading for an orchard near you 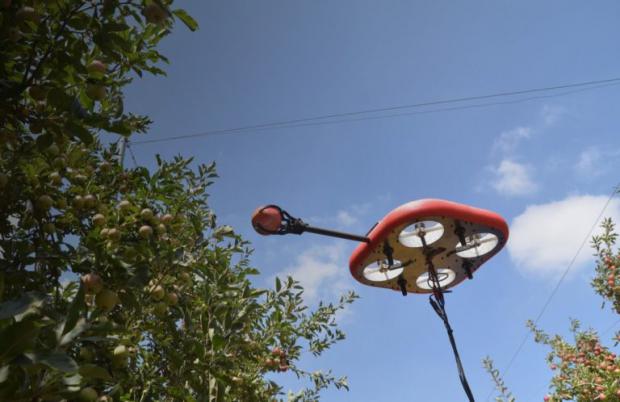 Each of the system's FAR (Flying Autonomous Robots) units consists of a wheeled base vehicle which travels up and down the rows of fruit trees, along with four quadcopter drones that are electrically tethered to that vehicle – it acts as their power source.

Utilizing their onboard cameras and AI-based computer vision algorithms, the drones are reportedly able to differentiate between individual fruits and other objects. They can also assess the size and ripeness of each fruit, plus they're capable of planning a collision-free flight path toward those that are deemed suitable for harvest.

The drones then use an integrated grasper arm – along with special stabilization algorithms – to actually pick the fruits, which they proceed to drop onto the deck of the base vehicle. They can do so throughout the day and night, as long as the base vehicle's battery lasts.

Plans call for users to rent fleets of the FARs as needed, letting the company know how many are required, at what time and for how long long. Once the units have been delivered and the picking commences, an app provides a real-time display of factors such as the amount of fruit picked, and the estimated time left in the harvesting process.

The system isn't available for commercial use yet, but will reportedly be utilized later this year in pilot projects at apple orchards in Spain, the US and Italy.