> A new heat engine with no moving parts is as efficient as a steam turbine - pirateswithoutborders.com 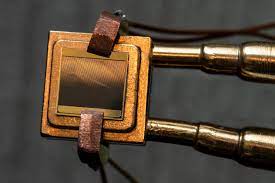 Engineers at MIT and the National Renewable Energy Laboratory (NREL) have designed a heat engine with no moving parts. Their new demonstrations show that it converts heat to electricity with over 40 percent efficiency — a performance better than that of traditional steam turbines.

The heat engine is a thermophotovoltaic (TPV) cell, similar to a solar panel's photovoltaic cells, that passively captures high-energy photons from a white-hot heat source and converts them into electricity. The team's design can generate electricity from a heat source of between 1,900 to 2,400 degrees Celsius, or up to about 4,300 degrees Fahrenheit.

The researchers plan to incorporate the TPV cell into a grid-scale thermal battery. The system would absorb excess energy from renewable sources such as the sun and store that energy in heavily insulated banks of hot graphite. When the energy is needed, such as on overcast days, TPV cells would convert the heat into electricity, and dispatch the energy to a power grid.