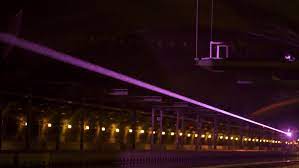 The idea of transmitting power over long distances without wires has been around for well over a century. By the 1970s, the technology was mature enough to make it a key component in a concept by American physicist Gerard K. O'Neil that proposed establishing space colonies to build huge solar collector stations to beam power back to Earth.

The principle is simple enough. Electricity is converted to microwaves, which are then focused in a tight beam at a receiver made up of what are called rectenna elements. These are very simple components that consist of an x-band dipole antenna with an RF diode. When microwaves strike the rectenna, the elements generate DC current.

Despite initial doubts, microwave beaming turns out to be surprisingly efficient and the NRL team led by Christopher Rodenbeck, Head of the Advanced Concepts Group, has been tasked by the Defense Department with developing the Safe and Continuous Power bEaming – Microwave (SCOPE-M) project to explore the practicality of fielding the technology.

Using a 10-GHz microwave beam, SCOPE-M set up at two locations. The first was the US Army Research Field at Blossom Point, Maryland, and the second was at the Haystack Ultra Wideband Satellite Imaging Radar (HUSIR) transmitter at MIT in Massachusetts. The frequency was chosen because it was not only able to beam even in heavy rain with a loss of power of under five percent, it's also safe to use under international standards in the presence of birds, animals, and people. This means the system doesn't need the automatic cutouts developed for earlier laser-based systems.