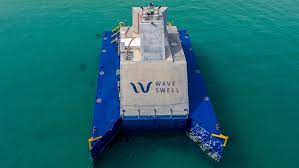 As we've discussed before, the UniWave system is a floating device that can be towed to any coastal location and connected to the local energy grid. It's designed so that wave swells force water into a specially designed concrete chamber, pressurizing the air in the chamber and forcing it through an outlet valve. Then as the water recedes, it generates a powerful vacuum, which sucks air in through a turbine at the top and generates electricity that's fed into the grid via a cable.

As a result, it draws energy from the entire column of water that enters its chamber, a fact the team says makes it more efficient than wave energy devices that only harvest energy from the surface or the sea floor.

WSE's key innovation here is that one-way generation; other devices that harvest the same effect use bi-directional turbines, requiring the ability to reverse blade pitch or redirect the airflow. WSE says its design allows for far cheaper and more simplistic turbines, that should also last longer since they're not getting as much salt water splashed through them when a big wave hits. Indeed, all this device's moving parts are above the waterline, a fact that should help extend its service life as well as making it completely harmless to marine life.

Interestingly, the UniWave's design also makes it easy to incorporate into breakwaters and seawalls, where it can take a coastal erosion protection project and turn it into a clean energy source. You can see an animation showing how it works in the video below.