> Canadian hospice group pushes to normalize euthanasia of children who are "suffering"- - pirateswithoutborders.com 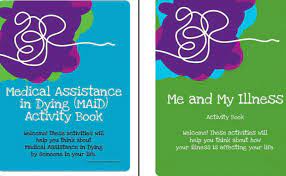 On July 26, CVH announced to the world via Twitter that its MAiD (Medical Assistance in Dying) publication is now ready. It was "[c]reated for young people who have someone in their life who may have MAiD," the tweet explains alongside a colorful, pro-death graphic clearly designed to appeal to children.

The publication contains many such images and graphics, as well as juvenile fonts, that ultimately lead kids to the discovery that there are three "medicines" that can kill a person. The goal is to make assisted suicide seem normal to children, as well as ease them into the idea that it is not just for old people.

MAiD is filled with propaganda designed to brainwash children into believing that euthanasia is easy, painless – this one is highly disputed even within euthanasia circles – and appropriate for people of all ages who are experiencing great difficulties living.