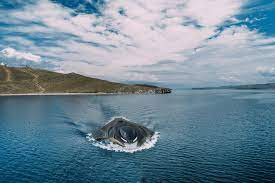 Clearly inspired by the manta ray, this hybrid beast rocks folding wings and 1,200 horsepower of propulsion.

Founded by Ukrainians, and now based between the UAE and the UK, Highland Systems is an enigma of a company, describing itself as an R&D and project management mob corralling a bunch of engineering specialists from around the defense world. Last time we bumped into these guys, it was to check out their Storm hybrid amphibious MPV, which looked like simply a bunch of wild renders. But the team brought a prototype to IREX Abu Dhabi in the flesh, and it's an absolute monster.

The rest of the company's portfolio is no less outrageous. The rambunctious sci-fi of the Phantom MPV. The rally-tastic Buggy Hunter MK-200. The ludicrous and highly efficient luxury Trimaran superyacht – which is either a scary-good set of renders, or it's actually been built.