> Russia plans to tow nuclear power station to the Arctic despite environmental... - pirateswithoutborders.com

Russia plans to tow nuclear power station to the Arctic despite environmental... 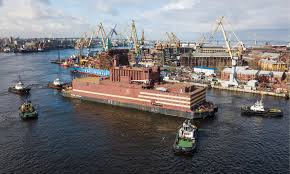 The Akademik Lomonosov, dubbed the 'floating Chernobyl' by its critics, has been under construction for almost two decades and is headed for the small Arctic port town of Pevek.

Currently based in Murmansk in Russia's west, the enormous 144-meter (472 feet) long platform will eventually supply electricity to settlements and companies extracting hydrocarbons and precious stones in the Chukotka region.

The huge power station was built under President Vladimir Putin's ambitious Arctic expansion plans, which have riled US observers.

Putin has stated his intention to develop the region economically, tapping into the hidden Arctic riches of oil and gas as Siberian reserves diminish.

Only two million people currently live in the hostile region but they generate as much as 20% of country's GDP.