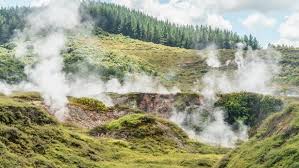 Now researchers at Tokyo Institute of Technology and Sanoh Industrial have developed a new type of battery cell that can directly convert heat energy into electricity.

Most geothermal systems work using water heated by hot rocks a few kilometers below the Earth's surface. That water is either naturally present and pumped to the surface, or pumped down, heated and pumped back up. Such systems often need high temperatures, over 180° C (356° F), to work, and don't necessarily scale up that well.

But the Japanese researchers behind the new study say they've got a more direct method. Their design is made up of sensitized thermal cells (STCs), which are able to generate electricity at temperatures below 100° C (212° F) without needing a middle-ground carrier like water or steam.

The STC is a battery made up of three layers of material sandwiched between two electrodes. There's an electron transport layer (ETM), a semiconducting layer of germanium, and a solid electrolyte layer that transports copper ions. This battery is designed to be buried in the hot ground.