> Peloton's Automated Follow feature would allow a person to drive two trucks at once - pirateswithoutborders.com 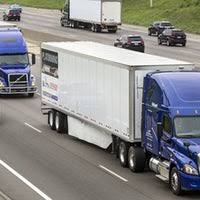 Startup Peloton has an interesting new take on this concept, describing an automated following system that would effectively allow a human to drive two trucks at once.

Everyone from Daimler, to Toyota, to the UK government are exploring the possibilities around truck platooning, an as yet experimental technology but one that could have a substantial impact on the transport sector.

It is couched in vehicle-to-vehicle communication technology, with autonomous trucks continuously broadcasting their position on the road to others in a fleet. This would allow the trucks to travel much more closely than they would if humans were in control, which can reduce congestion, accidents, fuel use and carbon emissions.