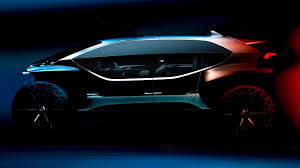 The Audi AI:Trail Quattro concept will debut at the 2019 Frankfurt Motor Show as the Four Rings' idea for a futuristic off-roader. The model will be the final entry in a series of four, previously revealed Audi electric concept vehicles: the Aicon sedan, PB18 grand tourer, and AI:ME hatchback.

Audi doesn't yet provide many specifics about the AI:Trail Quattro. Judging from the single photo, the design pushes the wheels out to the corners as far as possible. There are no overhangs from the body panels in an effort to maximize the approach and departure angles. The general styling appears angular but with curves for the shape of the windows to soften the look. The ample glass in the sides should provide lots of outward visibility for enjoying a view of nature while off-road.