> The Robot Ship Set to Cross the Atlantic and Change the World - pirateswithoutborders.com 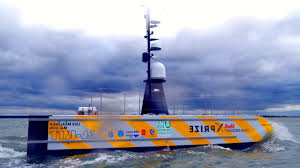 The blocky, 36-foot-long, yellow- and white-striped vessel bobbing off the coast of the United Kingdom sure doesn't look like much. But Maxlimer just might be the most important ship in the world right now.

Maxlimer is totally robotic. And it's poised to be the first unmanned surface vessel, or USV, to cross the Atlantic. The journey could prove the case for a host of new oceangoing drones: crewless cargo ships; unmanned oil tankers; robotic work boats.

But don't hold your breath. Widespread adoption could take years or even decades.

Maxlimer is a product of SEA-KIT, a maritime tech company based in southeast England. Eyeing potentially lucrative contracts supporting offshore oil and gas drilling, SEA-KIT aimed to produce a flexible ship that's cheaper and safer than manned ships are.