> Robot pilot that can grab the flight controls gets its plane licence - pirateswithoutborders.com 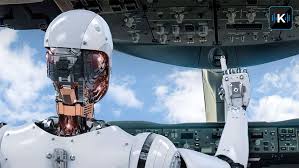 Unlike a traditional autopilot, the ROBOpilot Unmanned Aircraft Conversion System literally takes the controls, pressing on foot pedals and handling the yoke using robotic arms. It reads the dials and meters with a computer vision system.

The robot can take off, follow a flight plan and land without human intervention. ROBOpilot is a drop-in system meaning that the pilot's seat is removed and replaced with the robot.

ROBOpilot has passed the Federal Aviation Administration's Practical Test for piloting light aircraft and carried out its first flight on August 9 in Utah. A few weeks later it also had its first incident where the robot was damaged, although the extent of the damage is not known.