> These New Bionic Legs Allow Amputees to Feel and Use Prosthetic as If It Were Their Real Leg - pirateswithoutborders.com 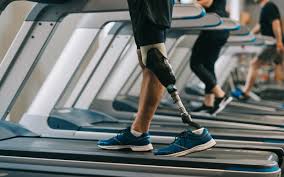 The amputees were able to climb over various obstacles without having to look thanks to sensory feedback from the prosthetic leg that is delivered to nerves in the leg's stump.

Djurica Resanovic lost his leg in a motorbike accident several years ago which resulted in amputation above the knee. Thanks to novel neuroprosthetic leg technology, Resanovic was successfully connected to his bionic leg during clinical trials in Belgrade, Serbia.

"After all of these years, I could feel my leg and my foot again, as if it were my own leg," reports Resanovic about the bionic leg prototype. "It was very interesting. You don't need to concentrate to walk, you can just look forward and step. You don't need to look at where your leg is to avoid falling."

"We showed that less mental effort is needed to control the bionic leg because the amputee feels as though their prosthetic limb belongs to their own body," explains Stanisa Raspopovic, the ETH Zurich professor who led the study.