> Meet The Futuristic, Fully-Autonomous Concept Truck Without A Cab - pirateswithoutborders.com

Meet The Futuristic, Fully-Autonomous Concept Truck Without A Cab 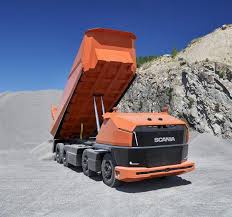 The vehicle is described as a "heavy-duty self-driving vehicle" and was designed by a group of Scania experts from different fields.

It features the company's modular system at the core of its design and could be used in many industries that are seeking out "more sustainable, self-driving vehicles to increase their productivity and performance."

Some examples including mining and construction, which are favorable for self-driving vehicles since they are well-controlled locations.

Scania describes the truck as "a step forward to smart transportation systems of the future". And the software in the truck will play just as big of a role as the hardware: the AXL is directed and monitored by an intelligent control environment.

In places like mines, autonomous operations can be facilitated by a logistics system that tells vehicle how it should perform.

Many self-driving autonomous trucks in use today still have a cab where a driver can sit, should the need to intervene arise. The AXL is designed without a cab, meaning no driver will be in the truck. Its combustion engine is even powered by renewable biofuel.