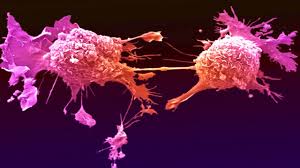 An experimental cancer drug that targets a common genetic fault has been shown to shrink tumours by up to 67 per cent in just six weeks.

Scientists tested their newly developed anti-cancer drug AMG 510 on four patients, two of whom saw their tumours shrink. It did not work for the others.

In studies on mice, the treatment helped to shrink, and in some cases eradicate, the growing tumours.

The daily pill works by turning 'off' the KRAS gene. Mutated forms of the genes are permanently trapped 'on', causing cancerous cells to multiply.

This abnormal activity fuels the development of up to 50 per cent of lung cancers, as well as some pancreatic and bowel cancers.

The pharmaceutical company described their findings as a 'milestone' for patients with cancer KRAS-mutant cancers.

The research was led by by pharmaceutical company Amgen Research, based in Thousand Oaks, California.

The findings, published in Nature, are the first to report the effects of inhibiting KRAS with a drug.