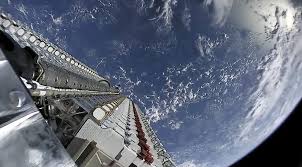 The 60 Starlink v0.9 satellites, launched May 2019, have the following characteristics:

SpaceX and Elon Musk will be made financially secure by 2023 via the Starlink satellites. They should have the $20 billion per year budget of NASA. If Elon has a 30X on his 54% share of SpaceX, then with Elon would have 30 times $10 billion in 2024 (50% of $20 billion in 2024). This means Elon would be worth over $300 billion without including any valuation for Tesla.