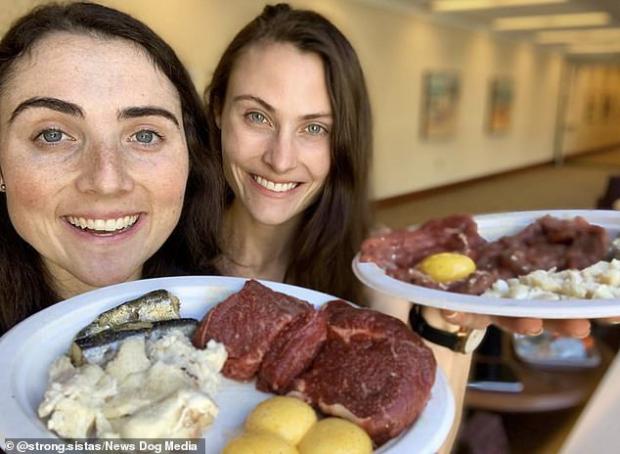 Ashley Armstrong, 26, and Sarah Armstrong, 23, from Urbana in Central Illinois, tried diets ranging from veganism to macro-based eating to a traditional low fat diet in the hopes of easing the crippling autoimmune issues they've suffered since their teens.

The siblings, who now feast on a mostly raw meat diet of uncooked organs, fat and eggs, say that since becoming 'raw carnivores' in June this year, they've been able to cure their chronic symptoms of constipation, bloating, depression, fatigue, circulatory problems and Raynaud's syndrome.

The pair pride themselves on eating the 'whole dang animal - nose to tail' with no vegetables in sight.

Ashley and Sarah, who boast almost 12,000 followers on Instagram with the handle @strong.sistas, are educating others about the benefits of a raw diet, and are even co-authoring a cookbook of carnivore-inspired recipes which will be published early next year.