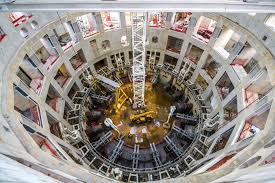 Nine years in the making, the facility is built to host the type of super-hot high-speed reactions that take place inside the Sun, and hopefully advance our decades-long pursuit of clean and inexhaustible nuclear fusion energy.

In the works since 1985, ITER (International Thermonuclear Experimental Reactor) is a type of nuclear fusion reactor known as a tokamak and is a collaborative project involving thousands of scientists and engineers from 35 countries. These donut-shaped devices are designed to accommodate circular streams of plasma consisting of hydrogen atoms, which are compressed using superconducting magnets so that they fuse together and release monumental amounts of energy.

There are key technological challenges to overcome when it comes to tokamak reactors. Chiefly, these center on bringing them up to the required temperatures and keeping the streams of plasma in place long enough for the reactions to take place.