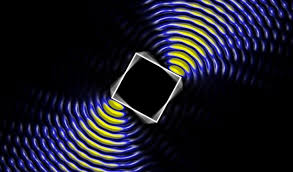 A special calculation method was developed to determine the perfect waveform to manipulate small particles in the presence of a disordered environment. This makes it possible to hold, move or rotate individual particles inside a sample – even if they cannot be touched directly. The tailor-made light beam becomes a universal remote control for everything small. Microwave experiments have already demonstrated that the method works.

Calculating the Optimal Wave
To achieve this, the particle and its disordered environment are first illuminated with various waves and the way in which the waves are reflected is measured. This measurement is carried out twice in quick succession. "Let's assume that in the short time between the two measurements, the disordered environment remains the same, while the particle we want to manipulate changes slightly," says Stefan Rotter. "Let's think of a cell that moves, or simply sinks downwards a little bit. Then the light wave we send in is reflected a little bit differently in the two measurements." This tiny difference is crucial: With the new calculation method developed at TU Wien, it is possible to calculate the wave that has to be used to amplify or attenuate this particle movement.

"If the particle slowly sinks downwards, we can calculate a wave that prevents this sinking or lets the particle sink even faster," says Stefan Rotter. "If the particle rotates a little bit, we know which wave transmits the maximum angular momentum – we can then rotate the particle with a specially shaped light wave without ever touching it."