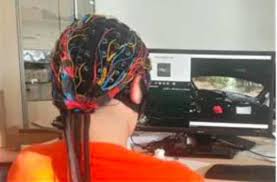 A mind-reading tool powered by artificial intelligence has produced a staggering video of human thoughts in real-time.

Russian researchers trained the programme to guess what people are thinking based on their brain waves.

They trained the AI by using clips of different objects, and the brainwave activity of participants watching them.

Participants were then shown clips of nature scenes, people on jet skis and human expressions.

Out of 234 attempts, 210 were successfully categorised by the video.

Colours and large shapes were deemed the most successful, the report adds.

But human faces were harder to recreate with many distorted, researchers said.

But since then Victor Sharmas, at the University of Arizona, commented on the video and said we are still only looking at the surface of human thought.