US Records Slowest Population Growth In Century As Births Decline 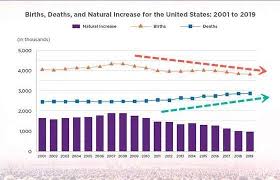 The report mentions how a lack of migrants entering the country along with a decline in natural increase has led to waning population growth since the 2008 financial crisis.

William Frey, a senior fellow at The Brookings Institution, told AP that the 2019 population growth is the slowest since 1917/18.

"With the aging of the population, as the Baby Boomers move into their 70s and 80s, there are going to be higher numbers of deaths," Frey said. "That means proportionately fewer women of childbearing age, so even if they have children, it's still going to be less."