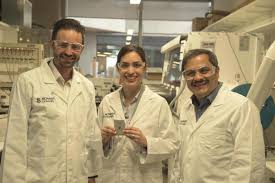 An international team of scientists believes it has now overcome this hurdle through a new type of bonding architecture, resulting in an unprecedented battery charge/discharge efficiency in a lithium-sulfur battery that could keep a smartphone running for days.

"Ironically, a main challenge to mass adoption of lithium-sulfur batteries until now, has been that the storage capacity of sulfur electrode is so large that it cannot manage the resultant stress," Monash University's Dr Mahdokht Shaibani, study lead author, explains to New Atlas. "Instead it breaks apart, in the same way we might when placed under stress."

Shaibani tells us this is because the stress leads to the distortion of key components, namely the carbon matrix responsible for passing electrons to the insulating sulfur, and the polymer binder that holds those two materials together. The resulting breakdown of this connection causes a rapid deterioration in the battery's performance.

So Shaibani and a team of international collaborators started looking at new ways of holding it all together. Rather than using the binding material to form a dense network with little room to spare, she decided to "give the sulfur particles some space to breath!"